Re-learning about Amsterdam, mass tourism and ‘academic myself’ | By Neringa K. 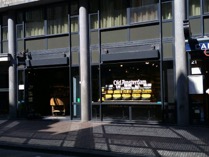 Firstly, local production, or in general – production – had changed. We had a chance to meet with several local entrepreneurs, who shared their concerns on how the streets, where their shops are located, had altered. For example, this cheese shop – it used to be a spot for locals to buy some of their favourite cheese from their ‘own cheese guy’. While hearing this backstory, such an idealistic vision came to my mind on how residents would come on an early Saturday to ask their ‘guy’ what kind of new cheese he/she got this week. My idealistic feeling washed away while seeing the modern commercialization of production. I wondered how many locals would visit such a shop nowadays…

However, we heard a different story while visiting ‘the smallest house in Amsterdam’! When we visited the tea house, the owner mentioned that his main clients are actually locals, even though the shop is in a touristic street. He also shared that if big groups gather in front of the building, tourists mainly photograph the place to remember that they had seen the smallest house in Amsterdam, but that’s it. They do not purchase anything. The owner was trying to sell some postcards with his shop for 1EU, but the visitors would take a photo of that instead. Interest in local production has become undervalued and unappreciated.

Despite the changes in production that we could see, I captured several other places that left an impression for me. We visited one of the waffle shops in the old city of Amsterdam. I did not know that they are very popular especially among ‘stoned’ people – at some point they need some ‘sugar sugar, baby’, and here comes the profits for waffle shop sellers! Consequently, it makes sense why waffle shops locate themselves close to the coffee shops. But more interesting for me was to find the ‘Golden collection’ inside of the shop which consisted of various types of money from different countries. It looked like a ‘heritage from below’ – a collection of footsteps from customers that might like to come back another time for ‘Nutella’ pancake or cannabis ice-cream. 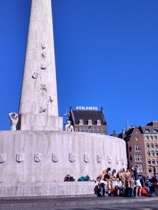 Another moment was right in the middle of the Dam Square. A well-known National Monument is always surrounded by people. A curious tourist on his/her own or while visiting a guided tour might hear a reasoning why this monument was built at first place – to commemorate those who have died in a Second World War. A not much visited part is the back of the monument, where are located 12 urns, with the soil of 11 Dutch provinces (including Indonesia as well) from the Second World War. But not everybody would know that, as nobody says they should. But then it is just interesting to see how such a public space (place?) is used by people passing by. It looks as this space is reaaaally used by people – sitting, leaning, laying, meeting on it or playing around it. It made me think – is it better that such a National monument would be surrounded by a fence and not used by people, or is it better that this space would be freely accessible without the realization of what it actually commemorates?

All in all, those were my several observations from the ‘Re-learning public space’ research event. Afterwards, I wanted to reflect on what I have learned and realized. One thing, which left an impression for me, was that we were together working with Landscape architecture students. Since I study Tourism, Leisure and Environment, it was a discovery for me to see what kind of questions other students ask about the public space, what kind of concerns they have when it comes to the design and co-creation of the place. In general, it was seen that interdisciplinary activities where students can share their academic knowledge with others are essential for them and also for the tourism industry.

Despite that, I had some other feelings and here it comes the ‘heaviness’ of the academic background that I was mentioning at the beginning. So far I shared my experiences during my recent visit to Amsterdam, but the first time I was here, I saw and experienced Amsterdam very differently. Together with several friends, we took bikes around the city and became those annoying bikers, who don’t know how to turn right or left, we took our first ‘space cakes’, while not having a clue how it works, and we visited for the first time ‘Sex museum’, because in Amsterdam everything is possible! That was my first time. Later on, after few years of studying tourism, here I am – while visiting Amsterdam, I would not go to a ‘Sex museum’, where I could meet only tourists, I would not walk the same way as I used to do… After studying, it becomes more difficult to look less critically at certain places or certain phenomena, when it involves a research and yourself. Research deepens your knowledge while it also influences the way how you look at the world. And that world is not only about research, but also about your individual life. It is hard to dis-attach yourself from what you have been taught to look at more critically and what you used to experience before, while some of your close people still do.

So yes, I learned a lot about the places in Amsterdam, how they had changed and what kind of ideas are there to re-change them, but I also saw how such knowledge and way of thinking influences my own relationship with the environment. Academic knowledge broadens your way of thinking, but it is also a ‘heavy package’, when it comes dealing with your surrounded people that you used to spend time together or still do.